As the saying goes, there are three types of people in the world: those who see, those who see when shown, and those who will never see.

The first group is the wisest as they take in all the beauty and wonder that life offers. They seek knowledge and wisdom, and their experiences inspire them to live their best lives. Indeed, wisdom is seeing the world for all that it is and making the most of every experience. Life is constantly unfolding itself before our very eyes, and it is up to us to take it all in. The wisest among us are those who see the world with fresh eyes every day, who find inspiration in the simplest things, and who know that every experience has something to teach us. By embracing wisdom, we open ourselves up to a richer, more fulfilling life. And what could be wiser than that? 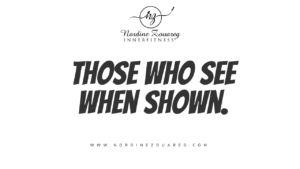 The second group of people is often just as intelligent and insightful as the first group, but they may not always be aware of the hidden gems in life. This is because they don’t always have the same perspective. When they are exposed to something new, however, they see its value immediately. This is because they can step outside of their own head and see the value in something from someone else’s perspective; they are willing to compromise. 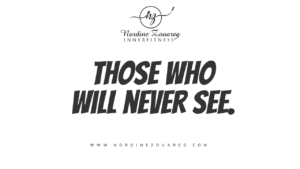 The third group, unfortunately, is composed of those who will never see, if they refuse to change, that is. They go through life without ever looking up from their phones or taking the time to appreciate the little things. They are distracted by an illusory and perhaps dangerous phenomenon called ignorance. They refuse to see for fear of being wrong even if it’s causing harm to others, or to themselves. Sadly, they lack awareness, and their self-destructive behaviors greatly diminish their quality of life and the quality of life of those around them. For lack of better words, it’s an ego trip.

Wisdom comes from taking the time to see what’s around you and also taking the courage to see others’ perspectives. So, for those in the first two groups, keep your eyes open and enjoy all that life has to offer. And for those in the third group, just take a step back and see the world through different eyes. It might surprise you what you find. As Wayne Dyer said: “When you change the way you look at things, the things you look at change.”

To which group do you belong?

Regardless of which class of people you belong to, only you have the power to change.

Sign up here to get the latest news, updates and special offers.

This website uses cookies to improve your experience while you navigate through the website. Out of these, the cookies that are categorized as necessary are stored on your browser as they are essential for the working of basic functionalities of the website. We also use third-party cookies that help us analyze and understand how you use this website. These cookies will be stored in your browser only with your consent. You also have the option to opt-out of these cookies. But opting out of some of these cookies may affect your browsing experience.
Necessary Always Enabled
Necessary cookies are absolutely essential for the website to function properly. These cookies ensure basic functionalities and security features of the website, anonymously.
Functional
Functional cookies help to perform certain functionalities like sharing the content of the website on social media platforms, collect feedbacks, and other third-party features.
Performance
Performance cookies are used to understand and analyze the key performance indexes of the website which helps in delivering a better user experience for the visitors.
Analytics
Analytical cookies are used to understand how visitors interact with the website. These cookies help provide information on metrics the number of visitors, bounce rate, traffic source, etc.
Advertisement
Advertisement cookies are used to provide visitors with relevant ads and marketing campaigns. These cookies track visitors across websites and collect information to provide customized ads.
Others
Other uncategorized cookies are those that are being analyzed and have not been classified into a category as yet.
SAVE & ACCEPT
Shopping Cart
Scroll to Top